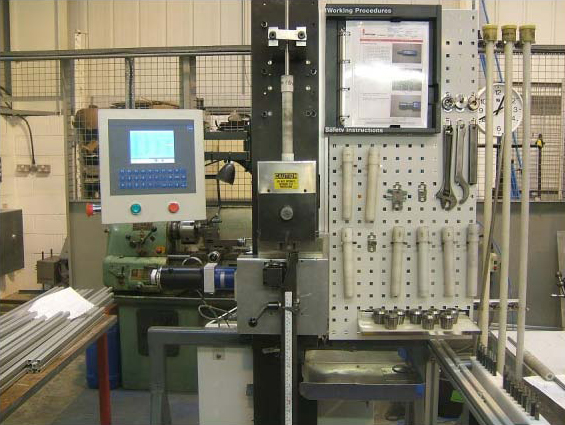 Refurbishment of a Tube Profiling Machine.

Our customer Wolf Automation was awarded the contract of upgrading a machine. We asked him about the project and this was his response:

"A multinational manufacturer of special purpose heaters and heating accessories had problems with their tube profiling machines and contacted us to see if we could help."

The profiling machine is fed with long lengths of stainless steel tube, many different sizes of tube and differing wall thickness's have to be catered for. The machine profiles the tube in a multitude of patterns dependant on the end use of the product before cutting the finished product off.

The existing machines were built in the USA over 10 years ago and have served the company well. However, they had idiosyncrasies and were becoming more and more un-reliable, the ever increasing amount of products that needed to be made pushed the machines past the limit. The operators interface was not friendly for the operator and even worse for the maintenance technician, it was time to see what could be done.

Various options were investigated by the company including replacement machines, but when quotes were gathered, the eye watering costs could not be justified. Wolf Automation was called in and found that all of the weaknesses of the machine existed in the control system.

Stepper motors were used to drive the two ball screws, these were underpowered as well as being susceptible to electrical noise. The stepper drivers were also un-reliable, obsolete and therefore very expensive to maintain. The Control Unit often crashed and had to be reloaded with its operating system and user programs, the method of programming was not intuitive, real world units were not used so the operator had to enter vague numbers by trial and error until the desired action was produced. There were a lot of limitations on what new products could be entered.

We designed a control system that used DC brushed servo motors with amplifiers and a combined motion controller and HMI by TRM. A gear ratio was also introduced on one of the axis to better match the motor to the load. We installed the control system on site and also handled the mechanical interface of the new motors and gearheads to the machine.

Once the new system had been installed onto the refurbished mechanics, the TRM motion controller which also handled the logic control was ready to go within an hour. The basic setup process only involves telling the controller details about the motors and gear ratios.

We programmed the end users products into the controller and tested each one against the exacting standards. The result is that the machine is now more reliable, easy to program, flexible and above all produces products that are accurate and repeatable”.